Recently, I had an interesting conversation where the discussion diverged into the application of geometry in security protocols. Until then, I didn't pay much attention to how we derive security protocols. Actually, most of the time we think about security constructs from the algebraic point of view. We hardly think in terms of geometric shapes. At that time, I couldn't think of a security protocol whose basis is geometry. So, did some research on the topic. Here's one example: one of the very first secret sharing scheme, Blakley's scheme, is based on the really cool idea of intersection of (hyper)planes. The idea is quite simple. Any non-parallel n n-dimensional hyperplanes intersect at a unique point and that unique point corresponds to the master secret and the n hyperplanes correspond to the secret shares. For example, two non-parallel lines on the same plane intersect at a specific point; two non-parallel planes in the space intersect a specific point. Even the idea behind Shamir's secret sharing scheme could be considered as a geometric construction. 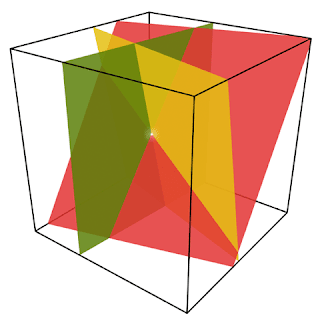 In the above diagram, each plane represents a secret share and the intersection point represents the master secret.

Posted by Unknown at 3:13 PM No comments: