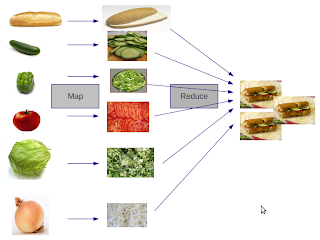 Input map to the mapper:

The encrypted data is hosted in an untrusted server (honest-but-curious case only) and a user wants to make a "special" query and obtain only the matching data objects. I use the word "special" since you need to have some kind of an encoded query in order for the server to execute it over encrypted data without decrypting the data.

Some of the security properties demonstrated by existing proxy re-encryption schemes:
1. The proxy cannot see the plaintext unless it colludes with Bob.
2. The proxy cannot derive the secret key of Alice (even when the proxy colludes with Bob).
3. The scheme could be bi-directional (When Alice delegates to Bob, automatically Bob delegates to Alice. So, Alice and Bob need to have mutual trust for such schemes to work) or uni-directional (Alice can delegate to Bob without Bob having to delegate to her. Thus, the trust relationship between Alice and Bob does not need to be mutual).
4. The scheme could be transitive (Alice can delegate to Bob, and Bob can delegate to Tim in turn for example.) or non-transitive (Bob cannot delegate to Tim).
Posted by Unknown at 10:47 AM 3 comments: