[ABE] How to re-encrypt without decrypting in the cloud?

ABE (Attribute Based Encryption) is a great invention by security researchers and allows to efficiently perform group based encryption. While it provides many benefits, revocation of users has been a key issue of utilizing ABE (FYI, another key issue is key escrow problem where one party knows all secret keys - as far as I know this is still an open problem. If you are looking for a ground breaking research topic, it could be this one; but be warned - it's hard, you may not find a solution ;) ). The most common way of revoking attributes in ABE is to periodically refresh secret keys given to users. (Another approach is to use short-lived attributes. For example, use a time based attribute which expires after a certain time in the future.) While this approach works, it does not scale: when there are many users, regenerating keys and sending them to users have a huge overhead. This also requires re-encrypting already encrypted documents to match the new keys. In this blog post, I am looking at an alternative approach that we can utilize. This blog post is inspired from the techniques presented in a recent paper by Sahai et al. [1] and the attribute delegation work done by Goyal et al. [2].

In a real life situation, revocation needs to handle two things:
(1) Make the policy under which data is encrypted is invalid for revoked user(s).
(2) Re-encrypt the affected data to reflect the revocation. (If we do not re-encrypt, a revoked user can use her old credentials to access the encrypted data.)

Some background information: In a modern group based encryption scheme, users are assigned attributes and the users having the same set of attributes belong to the same group. Let's say for this example, Bob has tagged Alice, Ted and Tim with the attributes "cool_friend" and "buddy", and is using ABE cryptosystem.

Bob does not trust the public cloud, so Bob uses a client side encryption as shown above (Encrypt(SK, M, policy("cool_friend" AND "buddy")) --> C) and keeps the secret key secret from the public cloud. 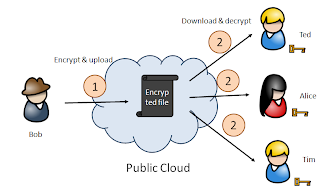 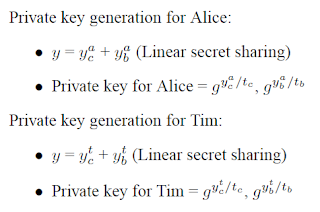 Now Alice, Ted and Tim can decrypt the document using their secret keys. 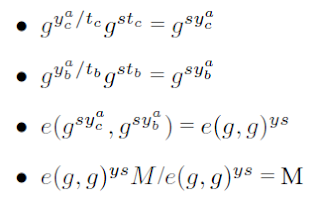 In a typical ABE setting, how does Bob do this revocation?
a. Generate new secret keys for Ted and Alice for the attribute "cool_friend" and "buddy", and send these to them (this process results in a new master secret key SK' and public key PK' as well.)
b. Download the encrypted document from the cloud and decrypt it (Decrypt(SK, C) --> M) and re-encrypt (Encrypt(PK', M, policy("cool_friend" AND "buddy")) --> C') and upload back to the cloud.

Can we do better? Can we delegate the re-encryption to the cloud itself? (The subject of this post.)
Decrypt -> Re-encrypt is off the table since in order to do that, Bob needs to give SK to the cloud, which is what Bob does not want to do in the first place - Bob wants to hide the content from the cloud. So, is there a way out for this problem?

One possible approach is as follows:
- Execute step 1
- Ask the cloud to do an onion encryption over the current encryption
Problem: size of the onion gets bigger and bigger as we do more revocations.

How can we encrypt under a more restrictive policy? Recall that the policies we deal with have a linear structure. We can restrict such policies in many ways. Here are some possible approaches:
- increase node threshold (for example from OR to AND)
- add an additional attribute to the access tree
- remove a subtree from the access tree

For illustration purpose, I will be using the second option. I am introducing a new attribute called "time" to restrict the policy. 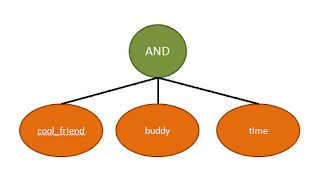 Bob uploads some public information to the cloud so that it can re-encrypt and also some additional public information to allow only Alice and Ted recover the secret components for the attribute "time". It is done in a way that Tim will not be able to recover the secret for the attribute "time". Hence, Tim will not be able to satisfy the new restrictive policy.

Additional secret given only to Alice and Ted

The following equations shows how the cloud does the re-encryption:

Alice and Ted can generate the following value:

It should be noted that the above scheme fails if Alice or Ted collude with Tim. I leave the readers to figure out a collision resistant way to do the ciphertext delegation (hint: read [1] :) I hope this post gave you some idea about how to do re-encryption for ABE in the cloud itself without decrypting.